As a global manager, I aim to help others 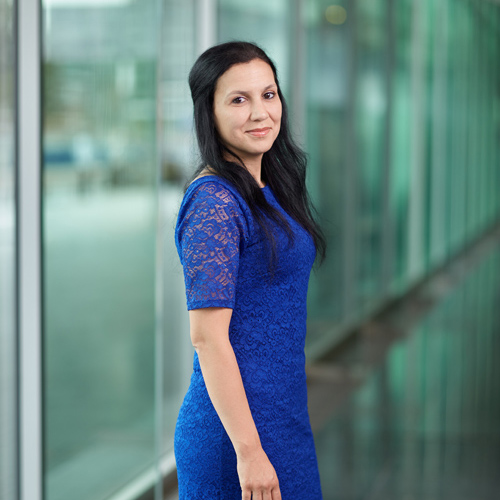 Mimoent Haddouti is the Global Head of IT Continuity and Security Services at Rabobank. After quickly rising through the ranks and being appointed to a global leadership role, she was named the 2016 Manager of the Year by the Ethnic Businesswomen of the Netherlands (EZVN) for her efforts to lead by example and open doors for others.

Today I lead a team of 275 employees in maintaining Rabobank’s IT continuity and cyber security. From the 24×7 Control Room, we monitor the bank’s global IT landscape, and from the Cyber Defence Centre, we keep hackers out. My team also oversees global crisis management and IT process support. If there’s a disruption in our mobile banking service, for example, we establish the process for resolving the issue with minimal client impact. We also manage the Service Desk of Europe.

At Rabobank, my days are dynamic. On the one hand, I look several years ahead from a strategic perspective, and on the other, my team and I handle crises and security threats that surface every day. In practice, I spend a lot of time in meetings – speaking with board members, stakeholders and colleagues. My team spans multiple continents and cultures, and I enjoy meeting different people and thinking about how we can work together to achieve results.

When I was a little girl, I wanted to be a doctor or a lawyer or a judge. I wanted to help people by ensuring they were healthy and treated equally. I was certain that this would be my path. However, one lesson I have learned is that life almost never goes as planned.

My first job at Rabobank was as an assistant. I took it after completing my VHBO studies in informatics and economics, and I planned to stay only a year to gain professional experience before returning to my studies full-time. Before I knew it, that year stretched into two, and so on. Eventually, I went back to school and pursued a different study. When I finished, I reached out to my former manager at Rabobank and began a career in project management.

I did my job well. I started running small projects with one or two employees. Soon, I began taking on larger projects. In what seems like no time at all, I was directing multiple IT projects, even though I had never studied IT. At this point, I began taking classes to develop personally and improve my competences in this new field. Eventually, I moved into a temporary IT management role, and it was made permanent after six months. That was six years ago now.

In Dutch, we have a saying: You have to jump into the water without knowing whether or not you can swim. I first learned this by watching my mother, who packed up her children and left her home in Morocco to join my father in the Netherlands, where she did not know the language or the culture. She raised nine children, and when the kids were raised, she went to school to learn Dutch. Her perpetual eagerness to learn and challenge herself inspires me. It has shown me that I can achieve anything so long as I am willing to work towards it.

Along the way, I found many people who helped me up. I sought out mentors, both men and women, who challenged me and helped me learn. They taught me not to listen to people who try to set limits for me. I am grateful to these people because they taught me that the sky’s the limit.

Now, as a global manager, an important part of my role is to help and empower others. Sometimes this means challenging my team members and letting them learn by doing. It also means giving them the freedom to make mistakes and the space to learn. I am proud of what I have achieved professionally. However, I have only had the opportunity to do so because my family and colleagues supported me, believed in me and took chances on me. I aim to do the same for my team every day.

When I started working in this field, it was rare to see women in IT roles. Even today, when I look around the room, there are clearly more men than women in senior positions. However, in recent years, Rabobank gave diversity a lot of attention. Diversity and inclusion are critical for teams to succeed. It is amazing to see how much can change in only a short time when leaders commit to change. Within Rabobank, remarkable progress has been made.

So, to the young women poised to take their first steps into the professional world, here is what I have to say: if you are eager to learn, there will always be people in the world who want to help you up. You just have to find them and ask for it. As you begin your careers, explore new interests, challenge yourself, and when you fail, do not give up. The world is yours – so give it your all, and go for it!