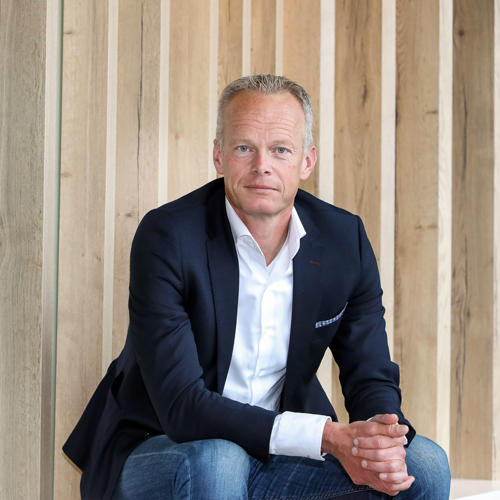 To be a leader is to address your own unconscious bias. Paul Slot, the Executive Vice President at KPN for Infrastructure and a member of the RightBrains Advisory Board, did just that to diversify his team.

He puts his job description simply: “Maintaining connectivity - for our clients and internally.”

Slot studied Electrical Engineering and Business Administration, enabling him to work at the helm of various IT departments globally over the years. He has been working through the ranks at KPN for the past 14 years.

“KPN asked me to set up an Operations Department, to optimise our IT department and our fixed and mobile networks. But this role has evolved into the development, innovation, build and roll-out for all our networks. At KPN we have a huge impact on society; if the network does not work, everything comes to a standstill.”

“My joy lies in working with people and technology.”

Slot describes himself as goal-orientated. As a triathlete and trainer, he understands endurance and having a long-term view. And also, the importance of a team.

“As a triathlete, my teams comprise trainers, dieticians, and physiotherapists. And you have to have the right people in your team to accomplish a goal. At KPN, I work with more than a thousand colleagues in my team.”

“If I want to improve my time in a triathlon, I have to set ambitious goals. And at work, if you want to bring about change, your objectives can’t be small. Only with big objectives will the organisation realise that it needs a real change in behaviour. Yes, there might also be drawbacks along the way, but you have to keep going on. If you have the right people, you will achieve your goal.”

Slot admits that he had to address his own unconscious bias.

“When filling positions in your team, it is easy to find clones of yourself. But you can’t have a team of Pauls; there will be no-one to compensate for your weaknesses or challenge your opinions. For me, diversity is the key to success.”

“In the past, I would approach someone I want in my team, usually a man, and he would go through the interviewing process and almost certainly get the final offer. Now, we bring in managers from different departments to help with the selection and interview process. In doing this, I can focus on the technical content, while they focus on other aspects. This brings in different perspectives when interviewing candidates, allowing us to make better decisions.”

He says that he is still working towards his diversity goal.

“Diversity can’t just be a corporate programme. As a leader, you have to create awareness. Live those values and implement the values in your team. Unfortunately, there aren’t a lot of women in the industry to take up senior roles now. So we have to work on getting more women in digital technology to be the leaders of tomorrow.”

“You have the older men who don’t want to change the status quo and young talent who want to reshape it. And there is friction between these groups. I think RightBrains can bring these groups together and address the challenges. RightBrains connects the young talent with companies that share their vision, and offer a platform for development.”

Slot shares RightBrains’ mission of a work environment with equal possibilities and equal opportunities. But he reiterates for this to be possible, seniors in the field have to be aware of their unconscious bias.

“Lead by example and create an environment conducive to a diverse team. And if someone makes an inappropriate comment, make it clear that it will not be tolerated. You must be the driving force for change.”

Meet Paul Slot during the RightBrains TECH Talk on 28 January.